View source
watch 01:40
The Sandman Will Keep You Awake - The Loop
Do you like this video?
Play Sound

Ataru Moroboshi (諸星あたる, Moroboshi Ataru?, lit. Falling star to get hit) is the male protagonist of Urusei Yatsura. He is the most lecherous teenager in the universe.[2]

Ataru is a 17-year-old student at Tomobiki High School, Class 2-4. He chases after and tries to grope every woman no matter what the situation, except his "wife", Lum. However, it is revealed on several occasions that she is the only one he actually loves. Despite this, he typically treats her like a nuisance and constantly disobeys her.

Born in April (4, an unlucky number in Japanese culture) on Friday the 13th, Butsumetsu, and the same day as a major earthquake, Cherry has referred to him as a carrier of bad luck rarely seen in this society.

Despite how stupid he seems, Ataru often displays remarkable intelligence, particularly when escaping from Lum. At times he appears to be superhuman, with the life force of a cockroach and the rejuvenation powers of a lizard, he possesses furious tenacity when trying to achieve something. As a result, he never gives up on his girl hunting, no matter how many times he fails or how bad Lum shocks him.

Ataru has occasionally let his good-natured side shine through, most notably when he took care of the class caterpillar everyone else hated and when he went on a date with the ghost of a sick girl who had admired him from afar.

Lum and few other of Ataru's friends once created an plot towards him to turn his personality upside down. This plan included their faked deaths and Mendō confronting Ataru as dressed up like him. The plan didn't work, though Ataru was quite shocked.

He is very lecherous with an idiotic personality, and often tries to escape class work. Whenever he sees or hears a pretty girl he immediately asks for their address and telephone number, but never succeeds.

Ataru constantly tries to ignore Lum but it is proven many times that Ataru cares about her, probably only hating her electric shock.

Ataru's outfits vary depending on the situation or weather. He is usually seen wearing his school uniform; however, during holidays he is often dressed in the appropriate attire, even at times kimonos or robes, and in the winter when not at school he commonly wears scarves or jackets. At home, like most Japanese, he never wears shoes; otherwise at home his clothes are best described as slovenly or sub-casual -- things he changes out of when he leaves the house. This is particularly true during the summer months, as notable in Beautiful Dreamer. He's also shown as pretty buff in the anime.

He has "cartoony" superhuman abilities. Being able to do incredible things just because the author wants him to do. He can pop up out of thin air and can defeat a judo trainer with a single throw. He also has shown to have very good stamina as well as running speed when he chased Asuka. He is one of the special students that need to be chained with an iron ball in order to make it a fair competition in a school event.

Like a variety of characters from the anime and manga, Ataru can catch a blade with his bare hands. He does the technique the most out of all the characters (especially when Mendō tries to slice him countless times) and is considered it's best practitioner as noted when he caught a moving Swordfish.

Ataru met Lum when he was randomly selected by a computer to represent mankind in a game of tag with the fate of the Earth on the line (Lum herself represented the Oni race). When it looked like Ataru would fail, Shinobu Miyake (his girlfriend at the time) promised to marry him if he won. Determined to do "the stuff that married people do", he succeeded in catching Lum and then loudly declared "Now I can get married!!" However, Lum mistook this as a proposal to herself and the two were immediately engaged. In the beginning he is cold-hearted towards her and saw her as a nuisance preventing him from girl hunting, but by the time of the story "A Night Alone!!" (夜を二人で!! ,, Yoru wo Futari de!!?) (Vol. 18) he was completely okay with sharing a bed with her. He is also shown to be quite jealous if another guy gets to close to Lum (ex: Rei, Mendō, Shingo, the Dolphin, etc). In the story "The Gloves of Love and War" (愛と闘魂のグローブ,, Ai to Tokon no Gurōbu?) (Vol. 21), in which he accidentally puts on boxing gloves that force him to grab and punch anyone who gets close enough to him, he continuously puts his own face in front of Lum's each time she gets too close, punching himself instead. This is just one of many instances when Ataru does everything he can to protect Lum from physical harm. Near the end of the series, in the story introducing Inaba, he decides to protect the future where he and Lum get married. In the final story they have another game of tag, this time with the Earth's memory of Lum and everything that has happened since her arrival on the line. Lum will let him win if he just says "I love you", but he refuses and tries to catch her himself. However, in the end, he shouts "Like I'll forget you" and Lum sees that he had kept something of hers (her old horns), so she tearfully allows him to catch her and continues to live on Earth with him. In the last panel of the series, Lum says that one day she'll make him actually say it, to which Ataru responds "Only on my deathbed".

He and Shinobu have known each other since they were little seem to have been friends.

Ataru's Mother, despite constantly wishing she never had him, loves him enough to keep him around and allowed him to live with her.

Oyuki, Benten, and Ran consider him a nuisance but a dear friend as he makes their friend Lum happy.

Ten is vastly annoyed by Ataru and the feeling is mutual. In much later issues and episodes, it wasn't uncommon to see the two absolutely beat the ever living tar out of each other. Ironically, Ataru and Ten have a lot of things common in them though Ten doesn't like to be put in his category. 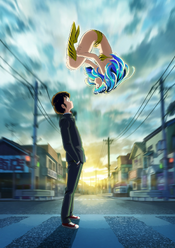