View source
watch 01:25
Jurassic World: Dominion Dominates Fandom Wikis - The Loop
Do you like this video?
Play Sound
This article is a stub. You can help Urusei Yatsura Wiki by expanding it.

Sakuranbou (錯乱坊, Sakuranbou?) is a Buddhist monk who wanders about Tomobiki. With it's kanji, his name means literally "deranged monk", but sakuranbo (桜ん坊, sakuranbo?) means Cherry (チェリー, Cherry?), which is what he prefers to be called. His real name is unknown. His niece is the very beautiful shinto priestess Sakura.

Cherry first appears in the very first chapter of Urusei Yatsura, where he correctly predicts that Ataru Moroboshi is a carrier of bad luck rarely seen in this world. From then on, he frequently appears out of nowhere, usually first appearing in a super close up of his face, which in turn usually causes all characters around him to pratfall. A notorious glutton, he sometimes shows up at the Moroboshi's dining table and proceeds to consume their food while speaking seriously about the current situation. He usually resides in a tent that he has set up in a vacant lot.

Though he is supposed to be a wandering monk, he seems to save more or less settled down in Tomobiki. As obvious from when he predicted bad luck for Ataru, he has very high spiritual powers. However, Ataru's bad luck often has a negative influence on his powers and botches his exorcisms.

Cherry's sister (Sakura's Mother) is a Shinto priestess, just like her daughter, but has the same facial features as her brother. In the anime, she is also voiced by Nagai Ichirou.

Role in the Manga

Cherry's role in the manga seems mainly to be to cause unnecessary trouble for Ataru and the main cast. His very sudden appearance in some chapters seems to cause the already weird plot to get much worse.

When he appears, he often predicts a bad omen, and they usually come true (even if he has to help it). 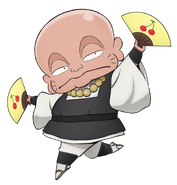