Ten befriends the ghost of a young girl whose dying wish was to hold a puppy.

The story is fundamentally the same, except that in the manga: 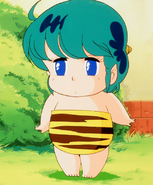