Dreaming Ten-chan! The Great Adventure at the End of the Rainbow!!

Dreaming Ten-chan! The Great Adventure at the End of the Rainbow!! (夢みるテンちゃん！虹のはてに大冒険！！, Yumemiru Ten-chan! Niji no Hate ni Dai Bōken!!) is the 186th episode of Urusei Yatsura.

Ten finds a wandering sprite stuck in a puddle, and sets out to find and return his lost umbrella to free the little guy who promises in return to make his dream become reality.

The plot is essentially the same, except: 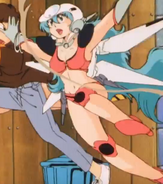