Lunch is a Battlefield

An all-out war breaks out as the Tomobiki High School students oppose the prohibition to leave the campus to eat out and must avoid being caught red-handed.

Differences from the Manga

The plot is the same and all the scenes in the manga are in the anime, with a lot of the chase and planning scenes being new (particularly anything involving Megane), although in the manga: 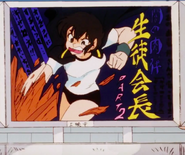