Document - Who Will Be Miss Tomobiki!?

Document - Who Will Be Miss Tomobiki!? (ドキュメント・ミス友引は誰だ！？, Dokyumento - Misu Tomobiki wa Dare da!?) is the 91st episode of Urusei Yatsura.

A beauty contest is held in Tomobiki High School with a reward of 150,000 yen for the winner. Candidates include Lum, Shinobu, Ran, Sakura, and Ryunosuke, and Ataru is the final judge. 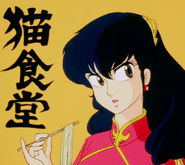