Start a Wiki
This article is a stub. You can help Urusei Yatsura Wiki by expanding it.

It’s summertime and Shinobu happens upon a boy wearing a rabbit costume who drops a key that leads to the room of destiny, a dimension filled with infinite doorways to various possible futures upkept by a group of sentient rabbits. Together with the bunny boy named Inaba, Shinobu, Lum and Ataru seek happy futures for themselves.

Differences from the Manga

The plot is essentially the same, except: 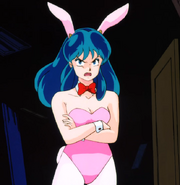 Add a photo to this gallery
Retrieved from "https://uruseiyatsura.fandom.com/wiki/Inaba_the_Dream_Maker_(OVA)?oldid=15809"
Community content is available under CC-BY-SA unless otherwise noted.