Lum meets Ataru Moroboshi when he was randomly selected by a computer to face her in a game of tag with the fate of the earth on the line. Ataru had been promised marriage by Shinobu Miyake if he could win, and upon catching Lum, he declared "Now I can get married!" and Lum mistook this as a proposal to herself and accepted it. As engagements are sacred on her planet, she's become completely determined to be married to Ataru for the rest of her life, falls completely in love with him, and refers to him as "Darling (ダーリン, Darling?)". Thus she's forced her way into his life as his "loving wife", and violently shocks him whenever he looks at or flirts with another girl (or if he does something to make her mad), but she always forgives him in the end.

Lum appears in this film of Urusei Yatsura: Only You and she attends Tomobiki High School, flying over Ataru. Megane plans to torture Ataru and find out who this "Elle" is. Lum saves Ataru inside the Clock Tower of school but it is soon revealed that she knew about Ataru's and Elle's marriage and came to torture Ataru further.

Lum's a sweet, innocent, faithful, and good-natured girl, but she can also get jealous and get hot-tempered, usually due to Ataru and his incessant addiction of flirting. However, in early chapters of the manga and at least till the start of season 2 of the anime, Lum had a nasty streak, almost antagonistic towards many of the characters. She even hatched schemes to be with Ataru when Shinobu was involved.

Her ears are slightly pointy and she has long green hair. She has two tiny horns on her head. She also has fangs on the top of her mouth.

She wears a tiger-striped bikini (based on the tiger-striped loincloths of mythical oni, which were made out of a man's bad karma). Her bra's also used to hold some of her special devices.

When she began attending school, she wore a sailor suit and tried to act like a typical earth girl.

Powers and other Abilities

In the beginning of the story, Lum's constantly hugging and kissing Ataru (whether he wants to or not), but by the end she calmed down considerably and simply holds onto his arm whenever they're walking somewhere. She's usually together with Ataru and does almost everything with him, like eating lunch with him, going to school and back, or going to a festival. Because of this, she's come to consider and treat his room as her home, though Ataru insists she sleeps in the closet. Takahashi's reason for this is that 2 high school students shouldn't be sleeping together. They also share a kiss in the last episode of the series "All-Star Banquet! We Are Immortal!"(although it should be noted Ataru kisses her unprovoked in the Open Invitation ending.)

She initially saw Shinobu as a rival that challenged her love for Ataru. However, as the story dragged on, they eventually become close friends and allies, using Shinobu's strength and Lum's electrical powers to accomplish things together. Shinobu gradually concedes and moves onto trying to build a relationship with Mendō, and later Inaba in the series.

Lum has always viewed Mendō as a reliable and close friend. Although Mendō strictly loves just Lum, to where she is all that his eyes can perceive, Lum is only interested in Ataru. Mendō's very defensive and protective of Lum and he's always looking out to assist her whenever she's needed, whether with his troops or with his own life. He treats Lum in a formal fashion, and he usually treats her to invitations and events but Lum wont attend his events if Ataru won't come with her.

Lum and Benten are childhood friends that have always caused trouble and havoc. They help each other whenever it's needed.

Lum and Oyuki are also childhood friends, but Oyuki in contrast to Lum has always held back and usually exhibited good behavior, although she has participated in the troublesome activities that Lum has participated in. Oyuki comes to Lum's assistance whenever she needs it, usually through the classroom's closet, freezing everything in her path.

Lum and Ran are childhood friends, but they share a great rivalry that's largely based in vengeance. Lum respects Ran and she's fearful of her tantrums, often "forgetting" events in the past where she got Ran in trouble. As a kid, Ran looked up to Lum as a protector, but she felt victimized by all the numerous times that Lum's gotten her in trouble, such as blaming bed wetting on her, or almost allowing her to get eaten by a dinosaur. She also despises Lum for having stolen Rei's love in the past, and she feels threatened that Lum maybe trying to steal Rei again. Then Ran followed Lum to Earth to plot her revenge. Initially, her plan was to take Ataru away from Lum, and potentially poison him with her lips. At other times, she plots to poison her herself. Despite all the hostile ambitions, Ran views Lum as a friend that she's always there for her, like one time when she was sick and Lum stayed by her bedside all night long.

Cherry and Lum have conspired and worked together multiple times (mainly in the first season.) Later one, Lum, like everyone around her, grew to dislike, or even hostility towards Cherry, though he didn't return the feelings, and often respected Lum.

Lum refers to herself in the first person as "uchi (うち, uchi?)" and she's famous for usually ending her sentences with "~datcha (～だっちゃ, ~datcha?)". When used by itself, "datcha" means "Yes". A similar speech pattern appears in Takahashi's debut work Katte na Yatsura, where the dappyamen add "dappya (だっぴゃ, dappya?)" at the end of all their sentences.

Lum's cameo in the OVA Maris the Chojo

Yotsuba with Lum as done by Kiyohiko Azuma 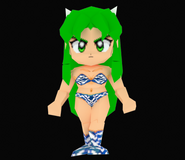 Retrieved from "https://uruseiyatsura.fandom.com/wiki/Lum?oldid=16702"
Community content is available under CC-BY-SA unless otherwise noted.