The Obstacle Course Swim Meet (ザ・障害物水泳大会, Za Shougai-mono Suiei Taikai?) is the 12th and final OVA of Urusei Yatsura. It is also one of 3 animations It's a Rumic World 30th anniversary and Weekly Shonen Sunday 50th anniversary.

Ataru and the others will join the competition of 'The Obstacle Course Swim Meet', organized by the Principal and Onsen-Mark. Each of the students need to face different kinds of obstacles during the competition, only few of them reach the finalist and their situation is getting harder and harder than previous obstacles.

During summer midnight, Ataru feels himself extremely hot and cannot sleep well while Kotatsu-neko places its kotatsu onto him, suddenly Lum returns from outside and brings wind chime that Oyuki gave her that acts as a 'cooler machine' to cool down the surrounds. Ataru feels happier as the wind chime keep providing a cool air for letting him to fall asleep.

On the next day, Lum starts to choose her best swimsuit for her summer swim in Tomobiki High. While everyone arrives at school, Onsen-Mark and the Principal start the assembly. Onsen-Mark says that for the one who wins the contest will be exempted from further summer homework.

The competition has begun! All of the students of Tomobiki High quickly rush to the main door of school hall. They had face different kinds of obstacles during competition, at the same time majority of them stuck at the obstacles before reaching to the pool. Thinking that there are more of them still can go through the obstacles with ease, Onsen-Mark starts to worry about his deal between the students-the homeworks. But the principal has an idea to stop them from getting win.

Meanwhile, Benten and Oyuki arrive at Ataru's house to visit Lum, but the windchime breeds rapidly and cover the whole house. The house are becoming ice, so with Ataru's parents. When Oyuki withdraws all the windchimes by using Absorber Box and plans to leave, the Three Daughters seem to be bring more troublesome for Benten again.

After the students face such obstacles, only Lum, Ataru, Shinobu, Ryūnosuke, Ran and Mendō arrive at the finalist. Onsen-Mark makes an announcement about for those who had success get the Dappya for this competition will get a kiss from the principal. Lum and the others decide to change their goals to avoid his kiss, keep losing themselves in purpose during the competition. Unexpectedly, Benten rides her air bike from the sky with rush for avoiding the Three Daughters' attacks. Since they are getting nearer Tomobiki High, the chaos has begun.

Ryōko realizes his brother is in trouble when she gets know through spy screen, she sends uncounted helicopters and tanks to protect her brother, but the situation turns worst. More and more chaos occur in Tomobiki High. During the chaos, Oyuki finds herself has lost the Absorber Box, Lum and Ataru accidentally press the button, and so whole of the windchimes start to break free and grow more rapid until cover the whole school compound. Within few seconds, the school becomes an ice hill, freeze all the people who near at school. Only Kotatsu-neko wins the competition with the Dappya, the principal gives it a kiss on its paw. All of the students feel awkward.

At evening, families and friends are gathering themselves at a place to celebrate Summer Festival. Ataru promises Lum that he will date with during the competition, but seems that Ataru had totally forget his promise and start to flirt the girls. Lum gets angry, captures Ataru from his back and shocks him by using electric shock. When the times has come, various types of fireworks dash to the sky, creating a marvelous patterns for starting Summer Festival. 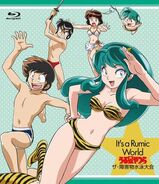