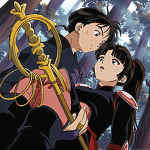 My nickname is Sango 珊瑚, it originates an Inuyasha character that act as a demon slayer. I admine this character very much, so I just use her name as my nickname. I started to get know about Urusei Yatsura since 2011, whereby I intended to tag somebody into It's a Rumic World fanart at Facebook. I success tagged all Rumiko's characters one by one by using their names, only Lum this characters couldn't be tag. At sudden, I realised that maybe I should watch this classic anime for sure. Not longer later, I found an episode of Urusei Yatsura at Youtube and watched it, this anime cheered me a lot after I watched the first episode.

While my SPM was over, I intended to return Inuyasha Wikia to improve the works within it, at the same moment, I found Urusei Yatsura Wikia through Google, I entered it and felt sympathetic on this Wikia-it was not very active than Inuyasha Wikia, no admin either, so I decided to help it by using my own way. Until nowadays, it improves a lot. With the help of Humpheh, I feel satisfy on seeing this Wikia improves day by day.

My favourite character in Urusei Yatsura series would be Oyuki, I love her because she is clever in making business. Apart from that, I also love her kimono and hair that briefly describe she is a snow woman that comes from Neptune.

Since Urusei Yatsura Wikia lacks of important information, I try to expand it as far as I can, for example List of animated media and List of published media. But nowadays I work at List of published media for rearranging the chapters, correcting the title of chapters and so on. I read some of Urusei Yatsura's chapters, so I'll try to add some stories onto the chapters.

If you guys have Facebook, just find me by clicking the link at above. I'll like to accept you as a friend!

Retrieved from "https://uruseiyatsura.fandom.com/wiki/User:Sango_%E7%8F%8A%E7%91%9A?oldid=5741"
Community content is available under CC-BY-SA unless otherwise noted.